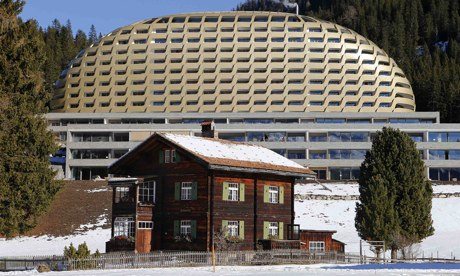 The InterContinental Davos luxury hotel in the Swiss mountain resort of Davos. Oxfam report found people in countries around the world believe that the rich have too much influence over the direction their country is heading. Photograph: Arnd Wiegmann/REUTERS
The world’s wealthiest people aren’t known for travelling by bus, but if they fancied a change of scene then the richest 85 people on the globe – who between them control as much wealth as the poorest half of the global population put together – could squeeze onto a single double-decker.
The extent to which so much global wealth has become corralled by a virtual handful of the so-called ‘global elite’ is exposed in a new report from Oxfam on Monday. It warned that those richest 85 people across the globe share a combined wealth of £1tn, as much as the poorest 3.5 billion of the world’s population. 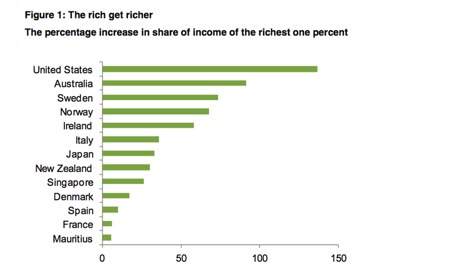 Source: F. Alvaredo, A. B. Atkinson, T. Piketty and E. Saez, (2013) ‘The World Top Incomes Database’, http://topincomes.g-mond.parisschoolofeconomics.eu/ Only includes countries with data in 1980 and later than 2008. Photograph: OxfamThe wealth of the 1% richest people in the world amounts to $110tn (£60.88tn), or 65 times as much as the poorest half of the world, added the development charity, which fears this concentration of economic resources is threatening political stability and driving up social tensions.
It’s a chilling reminder of the depths of wealth inequality as political leaders and top business people head to the snowy peaks of Davos for this week’s World Economic Forum. Few, if any, will be arriving on anything as common as a bus, with private jets and helicopters pressed into service as many of the world’s most powerful peopleconvene to discuss the state of the global economy over four hectic days of meetings, seminars and parties in the exclusive ski resort.
Winnie Byanyima, the Oxfam executive director who will attend the Davos meetings, said: « It is staggering that in the 21st Century, half of the world’s population – that’s three and a half billion people – own no more than a tiny elite whose numbers could all fit comfortably on a double-decker bus. »
Oxfam also argues that this is no accident either, saying growing inequality has been driven by a « power grab » by wealthy elites, who have co-opted the political process to rig the rules of the economic system in their favour.
In the report, entitled Working For The Few (summary here), Oxfam warned that the fight against poverty cannot be won until wealth inequality has been tackled.
« Widening inequality is creating a vicious circle where wealth and power are increasingly concentrated in the hands of a few, leaving the rest of us to fight over crumbs from the top table, » Byanyima said.
Oxfam called on attendees at this week’s World Economic Forum to take a personal pledge to tackle the problem by refraining from dodging taxes or using their wealth to seek political favours.
As well as being morally dubious, economic inequality can also exacerbate other social problems such as gender inequality, Oxfam warned. Davos itself is also struggling in this area, with the number of female delegates actually dropping from 17% in 2013 to 15% this year.

How richest use their wealth to capture opportunities

Polling for Oxfam’s report found people in countries around the world – including two-thirds of those questioned in Britain – believe that the rich have too much influence over the direction their country is heading.
Byanyima explained:
« In developed and developing countries alike we are increasingly living in a world where the lowest tax rates, the best health and education and the opportunity to influence are being given not just to the rich but also to their children.
« Without a concerted effort to tackle inequality, the cascade of privilege and of disadvantage will continue down the generations. We will soon live in a world where equality of opportunity is just a dream. In too many countries economic growth already amounts to little more than a ‘winner takes all’ windfall for the richest. » 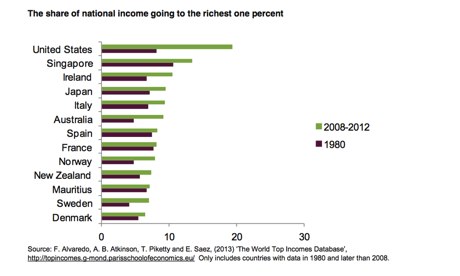 Source: F. Alvaredo, A. B. Atkinson, T. Piketty and E. Saez, (2013) ‘The World Top Incomes Database’, http://topincomes.g-mond.parisschoolofeconomics.eu/ Only includes countries with data in 1980 and later than 2008. Photograph: OxfamThe Oxfam report found that over the past few decades, the rich have successfully wielded political influence to skew policies in their favour on issues ranging from financial deregulation, tax havens, anti-competitive business practices to lower tax rates on high incomes and cuts in public services for the majority. Since the late 1970s, tax rates for the richest have fallen in 29 out of 30 countries for which data are available, said the report.
This « capture of opportunities » by the rich at the expense of the poor and middle classes has led to a situation where 70% of the world’s population live in countries where inequality has increased since the 1980s and 1% of families own 46% of global wealth – almost £70tn.
Opinion polls in Spain, Brazil, India, South Africa, the US, UK and Netherlands found that a majority in each country believe that wealthy people exert too much influence. Concern was strongest in Spain, followed by Brazil and India and least marked in the Netherlands.
In the UK, some 67% agreed that « the rich have too much influence over where this country is headed » – 37% saying that they agreed « strongly » with the statement – against just 10% who disagreed, 2% of them strongly.
The WEF’s own Global Risks report recently identified widening income disparities as one of the biggest threats to the world community.
Oxfam is calling on those gathered at WEF to pledge: to support progressive taxation and not dodge their own taxes; refrain from using their wealth to seek political favours that undermine the democratic will of their fellow citizens; make public all investments in companies and trusts for which they are the ultimate beneficial owners; challenge governments to use tax revenue to provide universal healthcare, education and social protection; demand a living wage in all companies they own or control; and challenge other members of the economic elite to join them in these pledges.