A new survey illuminates the extent of Chinese income inequality 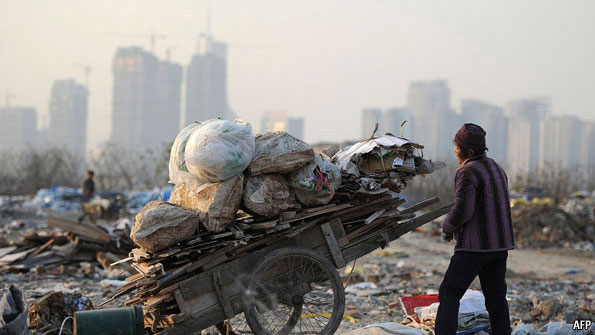 THANKS to apartheid, broken job markets and monopolistic mining, South Africa is one of the most unequal countries in the world. The top 10% of households pocketed 58% of the income in 2008, according to researchers at the University of Cape Town. The country’s Gini coefficient, which measures inequality on a scale of 0 to 1, was 0.7.

But South Africa’s inequality may soon be equalled by an unexpected rival: communist China. According to a new survey, the top tenth of Chinese households took home 57% of the income in 2010. The country’s Gini coefficient was 0.61, far higher than previous estimates (which ranged from 0.41 to 0.48). 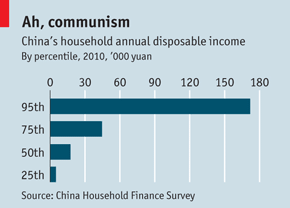 The survey, known as the China Household Finance Survey (CHFS), was overseen by Gan Li of Texas A&M University and Southwestern University of Finance and Economics in Chengdu, the capital of Sichuan province. Modelled on the Federal Reserve’s Survey of Consumer Finances, which covers almost 6,500 American families every three years, the CHFS covers 8,438 households in China, excluding Tibet, Xinjiang, Inner Mongolia, Hong Kong and Macau.

Surveying China’s multitudes is a daunting task. Having randomly selected 320 neighbourhoods to visit, Mr Gan’s team discovered that some had only half as many homes as the official data suggested, others had twice as many. Not everyone was willing to answer questions. The Southwestern students who carried out the interviews, which were done in 2011, had doors shut in their faces and insults hurled in their direction. They were obliged to try each household six times before giving up.

In rural Yunnan province the students travelled high into the mountains, where their questions about financial assets and rates of return were often met with incomprehension. One villager claimed he had no bank deposits. The interviewer assumed he was being evasive—until the villager retrieved a plastic bag with all his cash and began counting it.

Urban respondents were more recalcitrant: in the cities 16.5% of the original sample refused to take part, compared with only 3.2% in the countryside. Even so, these figures compare well with the 30% who refuse to take part in the Fed’s survey. Indeed, the students’ success in reaching households may explain why China’s inequality appears so high. Other surveys may miss a greater percentage of the very poor or the very rich.

The survey confirmed that Chinese households have rather little debt. Their liabilities amount to less than 5% of their assets, compared with over 16% in America. Remarkably, the combined wealth of China’s households (all their assets, minus their debts) came to $69.1 trillion in 2010. That is about 20% more than the net worth of American households.

From the print edition: Finance and economics